An Evening with Commodore Josée Kurtz

From June to December 2019, Commodore Kurtz served as the Commander of NATO's Standing Maritime Group 2, participating in Op Reassurance and other NATO confidence building measures in the Black Sea and the Mediterranean. Her presentation will provide an in-depth look at these activities. 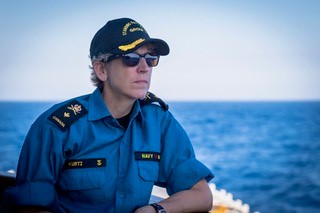 Commodore Josée Kurtz was born in Joliette, Québec. She spent three years as a sea cadet and a year as an instructor in the Cadet Instructor Cadre prior to joining the Canadian Armed Forces in 1988 as an officer in the Royal Canadian Navy. Following initial naval training leading to her bridge watchkeeping certificate, she specialized in navigation. She navigated frigates and deep draught vessels and had the privilege to share her interest and knowledge as a navigation instructor.

On graduating from the year-long Operations Room Officer Course in 1997, Commodore Kurtz served in HMCS VANCOUVER as Weapons Officer and Combat Officer. She was Executive Officer in HMCS VILLE DE QUÉBEC from 2007 to 2009. During this period, the ship deployed with the Standing NATO Maritime Group 1 (SNMG1) and was diverted on short notice for an anti-piracy escort mission with the United Nations World Food Programme off the Horn of Africa. Immediately following her second-in-command tour, she was appointed as Commanding Officer of HMCS HALIFAX from 2009 until 2011. The ship’s operational programme included a tasking to the Humanitarian Assistance and Disaster Relief mission in Haiti following the devastating January 2010 earthquake. Her major warship command was followed by an appointment as Commandant of the Canadian Forces Naval Operations School from 2011 to 2012.

In addition to service at sea, Commodore Kurtz has gained staff experience from Desk Officer up to Director General level, on the coast, with the Naval Staff, and at National Defence Headquarters, in the areas of operations, personnel, and security.

Commodore Kurtz holds a Bachelor of Arts from the University of Ottawa (2005) and a Masters in Defence Studies from the Royal Military College of Canada (RMCC) Kingston (2007). She is a graduate of the National Security Programme (2013) at the Canadian Forces College in Toronto.